MLO Mentor is an ongoing series covering compliance best practices for mortgage loan originators (MLOs). This article discusses the facts and features of reverse mortgages. Enroll in firsttuesday’s 8-Hour NMLS CE to renew your California MLO license and learn more about fraud and abuse prevention in your practice.

The reverse mortgage is a mortgage product that allows senior citizens (specifically, those 62 years old or older) to use their home equity as a stream of income.

The massive Baby Boomer generation (defined by the U.S. Census Bureau as the generation born between 1946 and 1964) is ripe for retirement. Many seniors hold the majority of their wealth in the form of paper – stocks. Much of this wealth was erased overnight when the stock market crash turned their 401Ks into 101Ks. However, citizens aged 65-75 are more likely to own property than any other age group. The vast majority of retirees will continue to pursue some form of traditional homeownership.

The decision to retire is often swiftly followed by a series of lifestyle changes. One of the most significant changes is the change to the retiree’s flow of income. According to the Consumer Financial Protection Bureau (CFPB), half of homeowners aged 62 or older had at least 55% of their net worth tied up in their home equity in 2009.

As Baby Boomers begin to retire in earnest, some will sell their homes and relocate to be closer to family and warmer climates. Others will remain in their existing homes and seek to tap the equity which they have built up over years of making mortgage payments.

The reverse mortgage programs currently available in the market can assist in both circumstances. Thus, there is huge potential for reverse mortgage demand to grow in the near future, to meet the needs of the retiring Baby Boomers.

But how ready are the reverse mortgage programs we have for the coming wave of seniors? The majority of reverse mortgages originated are insured by the U.S. Department of Housing and Urban Development (HUD)’s Federal Housing Administration (FHA) under their Home Equity Conversion Mortgage (HECM) program. In 2013, the FHA made several important changes to the HECM program to staunch the massive losses resulting from the housing and mortgage crises.

However, these changes were not sufficient to quell the continued financial threat facing the FHA’s mutual mortgage insurance fund (MMIF).

In August of 2013, Congress passed the Reverse Mortgage Stabilization Act of 2013 giving HUD the authority to establish additional qualification requirements for the HECM program. Many of these changes, including the establishment of initial disbursement limits, went into effect on loans with FHA case numbers assigned on or after September 30, 2013. [12 United States Code §1715z-20(h); HUD Mortgagee Letters 2013-27, 2013-28 and 2013-33]

Further changes were made in 2014 to curb risky behavior undertaken by some lenders and borrowers in response to the 2013 changes. Additionally, clarification of a non-borrowing spouse’s responsibility after the death of the reverse mortgage borrower was provided. [HUD Mortgagee Letters 2014-07, 2014-10 and 2014-11]

HUD also proposed new rules for borrower financial assessments and funding requirements for the payment of property charges. Initially, the financial assessments and funding requirements were slated to go into effect on January 13, 2014. However, HUD delayed the implementation, pending review of comments received in connection with the proposal. [HUD Mortgagee Letters 2013-27, 2013-28, 2013-33 and 2013-45]

In 2016-2017, HUD finalized rules to further control MMIF exposure caused by volatility in the HECM program. According to HUD, the HECM portfolio went from -$1.2 billion in the 2014 fiscal year to $6.8 billion in 2015 to -$7.7 billion in 2016. The changes mainly codified existing policy set forth by HUD Mortgagee Letters, but also included an additional disclosure requirement. [82 Federal Register 7094-7146]

What is a reverse mortgage?

A reverse mortgage is a loan product designed for older homeowners. Although some lenders offer proprietary reverse mortgages without government guarantees, the vast majority of reverse mortgage originated are insured under the FHA’s HECM programs. For simplicity, we will use reverse mortgage and HECM loan interchangeably in this module. [12 USC §1715z-20(a)] 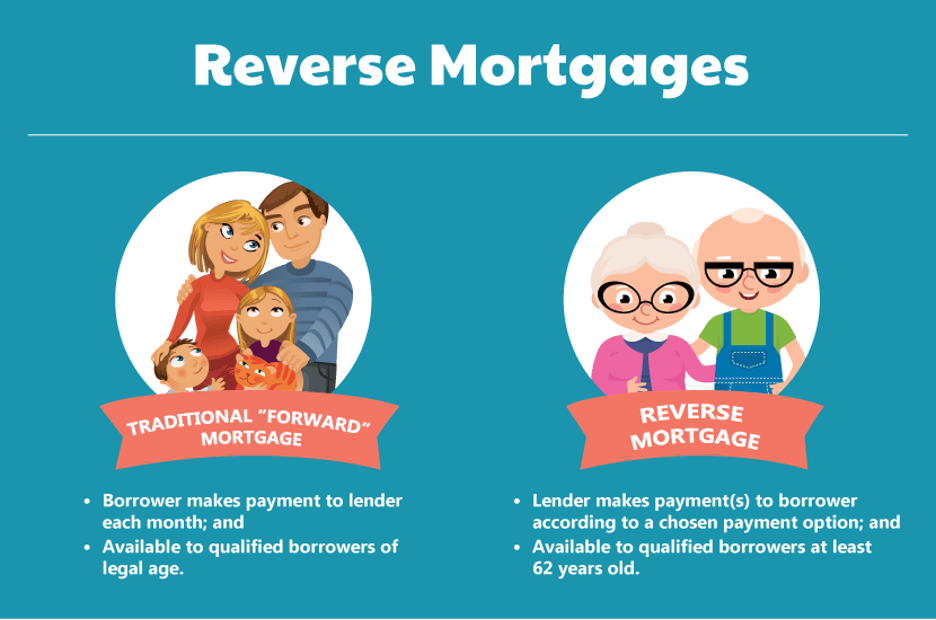 The original purpose of the HECM program was two-fold:

The method of calculating the payment to the borrower each month is chosen by the borrower, subject to limits. The limit to total disbursements is determined by considering the value of the borrower’s home (or, more accurately, the maximum claim amount, which is the lesser of the home’s appraised value and the maximum loan amount allowed in the neighborhood as set by the FHA), the current interest rate and the borrower’s, or their eligible non-borrowing spouse’s age. [HUD Handbook 4235.1 Rev-1 Chapter 1-4.A; HUD Mortgagee Letter 2014-07]

The principal limit generally increases every month by one-twelfth of the sum of the expected average mortgage interest rate, plus the monthly mortgage insurance premium.

When the outstanding mortgage balance (the amount the borrower has been paid, plus any mortgage insurance premium payments, closing costs or other amounts set aside from the principal limit for servicing fees) equals the principal limit, the borrower cannot receive any more payments. However, they may remain in the property as long as they pay their taxes and insurance, and maintain the property. [HUD Handbook 4235.1 Rev-1 Chapter 5-5]

Note that while the principal limit increases each month, the new initial disbursement limits do not allow the borrower to draw on the increased amounts during the first 12-month disbursement period. [HUD Mortgagee Letter 2014-21]

Since the reverse mortgage is pulling equity out of an illiquid asset (the house), reverse mortgages are only available to borrowers who have paid down all, or most, of the principal balance on their existing mortgages. [HUD Handbook 4235.1 Rev-1 Chapter 1-3.G.3]

The borrower’s home is the collateral for the reverse mortgage.

Additionally, the debt is a nonrecourse debt. This means the lender’s only means of collecting on the debt is a foreclosure on the property. Neither the borrower nor their heirs may be personally pursued for the debt on a reverse mortgage.

However, interest and mortgage insurance premiums do accrue with each advancing month. So, while the borrower is able to draw a certain amount of equity out for their own use (limited by the principal limit), the remaining equity (the difference between the maximum claim amount and the principal limit) not accessible by the borrower is slowly reduced by the interest accrued on the loan. In other words, the interest due on the loan adds to the total amount due to the lender. [24 Code of Federal Regulations §206.19(e)]

Any mortgage insurance premium due the FHA is added to the loan balance each month, reducing the principal limit. [24 CFR §206.25(e)]

A reverse mortgage is not required to be repaid unless or until:

If there is more than one borrower on the loan and one borrower dies or otherwise moves from the property, repayment is not triggered if the surviving borrower still occupies the property as their principal residence. [24 CFR §206.27(c)]

However, for HECM loans with case numbers assigned on or after August 4, 2014, if the borrower is married at the time of their death, and the borrower’s spouse was not a borrower on the HECM loan, repayment of the HECM loan is deferred. This eligible non-borrowing spouse deferral period is subject to some restrictions. [HUD Mortgagee Letter 2014-07]

HECM loans can be used for three purposes:

The most prevalent use is the traditional HECM reverse mortgage.  We’ll discuss the qualification for that program in next week’s MLO Mentor, then move on to discuss how the purchase and refinance transactions work under the HECM program.