Home prices fell sharply again in August according to the two leading home price indices, both released this morning.  The Federal Housing Finance Agency (FHFA) logged a month-over-month decline of 0.7%–a modest acceleration from the 0.6% decline seen in July.  The S&P Case Shiller 20 city index fell 1.3% in today’s report compared to a 0.7% drop last month.

Does this mean prices are falling?  Technically, yes.  Using FHFA as an example, it means that a home that sold for $397k in June would have sold for roughly $392k in August.  Moreover, the shift from gains to losses has been incredibly abrupt.  The following chart shows the different in the monthly price movement from the same period last year. 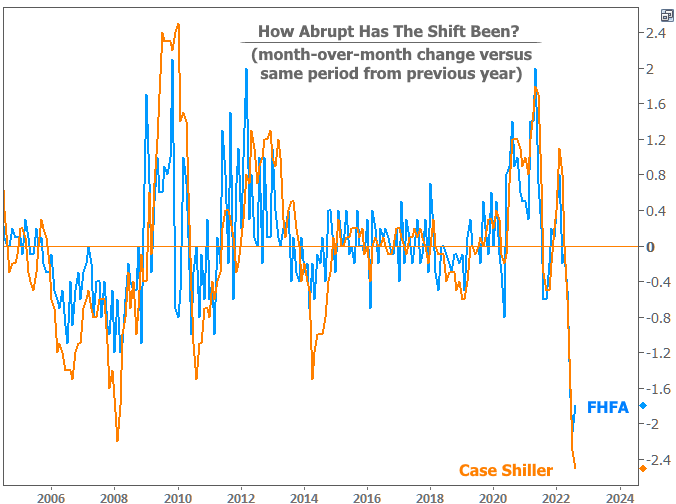 As abrupt as the shift has been in terms of the monthly trajectory, home prices are typically tracked in terms of outright year-over-year changes.  While it’s true that year-over-year gains are lower than they were a few months ago, they’re still strongly positive.  In fact, the home that sold for $392k in August of this year would have sold for roughly $350k in August of last year, a difference of 12%, year over year. 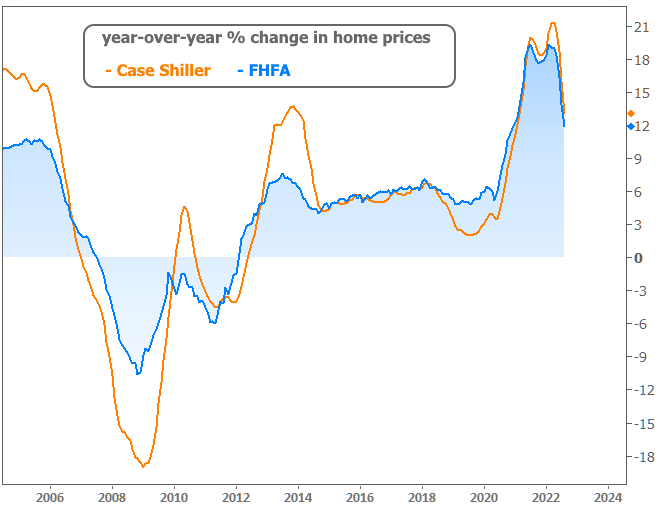 As the chart above suggests, 12% year over year is very high–higher even than the run up to the mortgage meltdown in 2007-2009.  That said, the 12% number is likely to continue lower in the coming months.  That will be true even if prices don’t go any lower simply because subsequent months will be compared to higher and higher prices in the past.

Looked at another way, just consider that $397k value from June 2022.  Now imagine that the $392k level from August doesn’t change for 10 months.  In that scenario, by next June, the year-over-year price drop would 1.3% as opposed to the current 12% gain.  Note: this is not a prediction.  It’s just an example of the phenomenon of “base effects” (the change in present day data that results from a change in the basis for comparison).

Rather than make any predictions, let’s take a look at separate data from Redfin, showing a potential leveling-off in summertime home price declines.  The following chart shows the median sales price per square foot.  The decline in July and August is similar to the decline seen in the FHFA and Case Shiller indices.  From there, Redfin data shows prices flattening out. 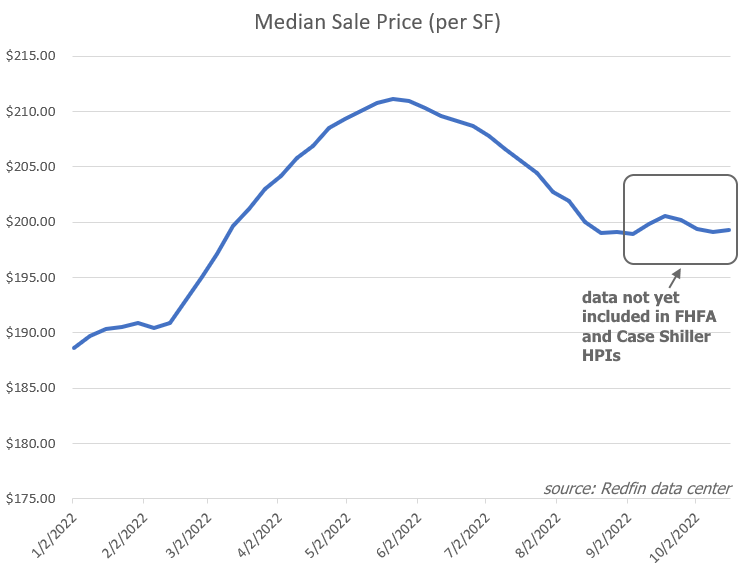 There’s no guarantee that national price trends follow a similar path, but it’s something to consider. Even then, ebbs and flows in interest rates and the economy will ultimately have a big say in the nature of price movement a year from now.

With today’s update on prices from the FHFA, we’re now only one month away from receiving the Q3 price data required to calculate conforming loan limits for 2023.  The quarterly data differs slightly from the monthly data, but based on the monthly numbers, the conforming loan limit would be down to $714,650 after being as high as $724,650 at the end of August (based on July’s price data).