MORTGAGE rates have risen sharply in recent weeks, amid the fallout from the mini-budget.

Bank of England base rate rises have also been pushing up mortgage rates – and further rises to the base rate are expected.

It comes after mortgage rates shot up due to the impact of the mini Budget at the end of September.

Further chaos was then caused by the Government U-turn last week when many of the policies were scrapped.

Last week, mortgage rates also shot up to above six per cent – their highest levels in 14 years after the pound tumbled.

It’ll bring misery to two million homeowners who are coming to the end of two-year fixes soon, after previously getting a deal when rates were at historic lows. 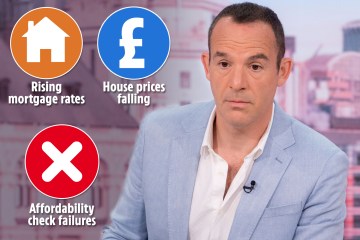 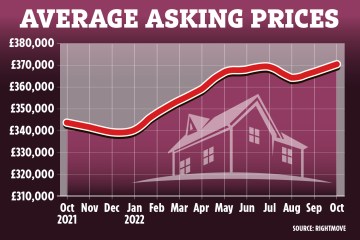 Millions of households are predicted to see their annual mortgage payments rise by an average of £5,100 between now and the end of 2024, according to the Resolution Foundation.

The Bank of England has warned that if mortgage rates remain high then the number of households struggling to make repayments will reach the same levels as in the global financial crisis in 2008.

Some home buyers who already have a mortgage in place may be pressing ahead.

Others may choose to sit it out for a while to see what happens to mortgage rates and house prices in the coming months.

But will the mini-budget reversal mean that mortgage rates will come down?

Anthony Rose, chief executive from mortgage broker LDN Finance, said the mini-budget chaos coupled and Liz Truss’ resignation means there is “unlikely” to be a quick reduction from the banks.

He said: “As there is renewed uncertainty over the new Tory leadership election and the upcoming interest rate decision from the Bank of England, it seems likely that mortgage rates will be on an upward trajectory over the coming weeks.

“It is fair to assume that we would need a good few weeks of stability before we can hope that lenders will have the confidence to improve their rate offerings en masse.”

It comes as Martin Lewis called for “regulatory preparation and intervention” to help protect people and the economy from at least part of the fall-out if the worst happens.

This could include changing affordability rules for remortgages, more flexibility on term changes and payment holiday options, he added.

Last week, The Sun’s Head of Consumer gave her expert advice on what you can do now, which we’ve rounded up below.

What should I do now?

Double-check what type of mortgage you have — fixed or variable — what your rate is, when the deal finishes and what the penalty might be to leave early.

If you are on a fixed deal, work out when your bills will start rising and by how much.

They will pay £420 a month extra when their fixed term ends in December 2023, according to Moneyfacts.

Is it worth paying a penalty to get out of my existing deal?

Many lenders will let you lock into an offer three to six months before your current deal ends.

It is worth doing your sums either way, but Nick Morrey, technical director at mortgage brokers Coreco, said: “It’s not an easy calculation.”

If you are considering leaving your current deal early, you will have to factor in any early repayment charge, plus any fee for taking out a new mortgage.

And that’s before you start comparing the rate of your existing mortgage with a new one.

A good starting point to help you do the sums is MoneySavingExpert’s Ditch Your Fix calculator.

Everyone needs to consider their own personal circumstances to find the best mortgage to meet their needs.

Variable and tracker mortgages may currently look cheaper than a fixed-rate deal, but they will rise if — or more likely when — the base rate goes up again next month.

Those who value the security of knowing how much they will be paying each month should opt for a fixed rate.

Mortgages can be confusing but a broker can help you navigate the maze.

They may earn commission from lenders after arranging a mortgage, and some will also charge you a fee, which will either be a flat rate or a percentage of the amount you want to borrow.

Make sure you speak to a whole-of-the-market broker, so they can access all the deals available, not just a selected few.

You should always check that your broker is authorised to give mortgage advice by consulting the Financial Services Register.

Should I plough my rainy day fund into reducing my mortgage?

Check what fees or penalties you may face for paying extra off your mortgage.

Many lenders let you overpay ten per cent of the balance each year without penalty and paying off that bit extra could bring your payments and interest down.

But before you plough money into your mortgage, make sure you pay off more expensive debts, such as credit cards, and have enough money set aside to pay three to six months’ worth of essential bills.

I’m a first-time buyer, what should I do?

It can seem an especially scary time to take that first leap into home ownership, even with the threshold for paying stamp duty for first-time buyers now £425,000.

But that does not automatically mean that buying a house is off the cards.

Nick says that waiting in case property prices fall is not necessarily a smart move.

He added: “My advice to first-time buyers is if you are in a position to buy and you can afford the mortgage and you are not planning on selling it in the near future, you should strongly consider going ahead.”

What should I do if I am struggling to pay my mortgage?

Nick said: “They have a duty of care to make sure you are aware of what your options are and to take steps to try to assist you where they can.”

You can also get free one-to-one debt counselling help from Citizens Advice, StepChange or National Debtline.

Speaking on ITV’s Good Morning Britain last month, Martin Lewis said that those on variable rate mortgages or fixed deals coming to an end in the next three to five months should take action now.

He suggested that they should go on a comparison website to see what mortgage rates are currently available.