According to interest.co.nz’s Home Loan Affordability Report, the REINZ’s national lower quartile selling price declined by almost $11,000 at the end of last year, dropping from $670,000 in November to $659,000 in December.

However that brought almost no relief to prospective first home buyers because the benefit of slightly lower prices at the bottom of the market was almost entirely eaten up by higher mortgage interest rates.

The average of the two year fixed rates offered by the major banks increased from 4.08% in November to 4.21% in December, marking the seventh successive month of mortgage rate increases since they bottomed out at 2.52% in May last year.

If that pattern persists there may be little relief in sight for first home buyers struggling to afford a home of their own, because although housing prices are expected to soften over the next year or so, mortgage rates are expected to keep rising, which means any benefit of lower prices may be eaten up by rising mortgage interest rates and higher mortgage payments.

Essentially, house prices would have to start falling at a much greater rate than interest rates are rising for first home buyers to receive any substantial benefit.

The situation for first home buyers at the end of last year was compounded by the fact that although the national lower quartile price declined in December compared November, it actually increased in eight of the 12 REINZ sales regions, setting record highs in seven regions (Northland, Waikato, Bay of Plenty, Wellington, Canterbury, Otago and Southland), while the lower quartile price in Auckland was unchanged from November’s record high.

Interest.co.nz’s Home Loan Affordability Report calculates how much money would be needed for a 10% or 20% deposit on a home purchased at the lower quartile selling price in all of Aotearoa’s main urban areas, and then calculates the amount of the resulting mortgage payments.

That is then compared with the median after-tax pay for couples aged 25-29 in each region, assuming both work full time.

Housing is considered unaffordable when the mortgage payments eat up more than 40% of take home pay (the tables below show the results of those calculations based on 10% and 20% deposits).

This shows that the mortgage payments on lower quartile-priced homes would now be considered unaffordable in the majority of regions around the country for young couples on average rates of pay if they only had a 10% deposit.

The only regions where mortgage payments would considered affordable for couples on average wages with a 10% deposit are Manawatu/Whanganui, Taranaki, Canterbury, Otago and Southland.

All other parts of the country are considered unaffordable for people on average wages.

However, if first home buyers can scrape together a 20% deposit, that reduces the mortgage payments as a percentage of after-tax pay sufficiently for all regions except Auckland to be considered affordable.

But getting together a 20% deposit wouldn’t be easy either.

That all but rules out home ownership for young people on average wages in Auckland and it wouldn’t be easy in the rest of the country either, with Southland and Taranaki being the only regions where the amount needed for a 20% deposit on a lower-quartile-priced home is less than $100,000 (refer to the tables below for the full regional figures).

Unfortunately home ownership is increasingly becoming the preserve of the highly paid or those who have access to capital from other sources such as obliging parents or winning Lotto.

But for most young people on average wages, saving for a home of their own is increasingly looking like the impossible dream. 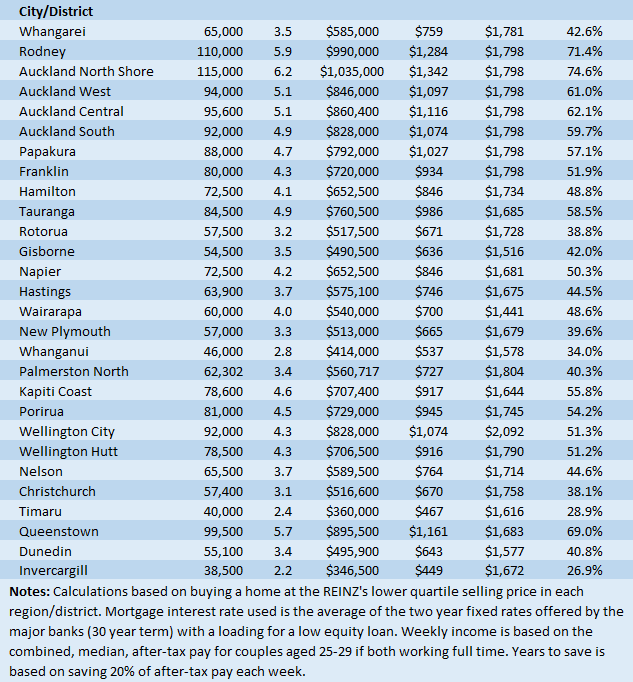 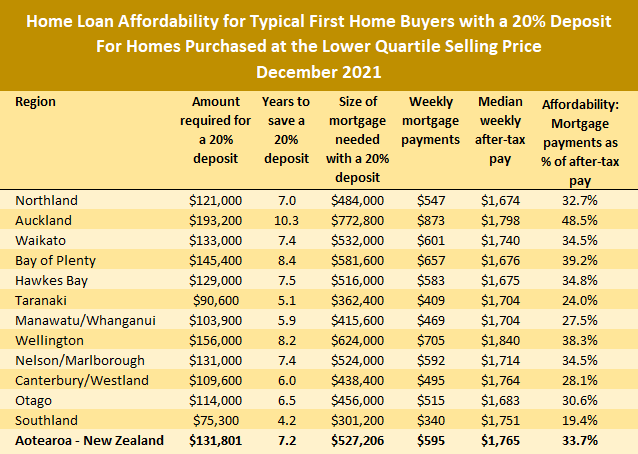 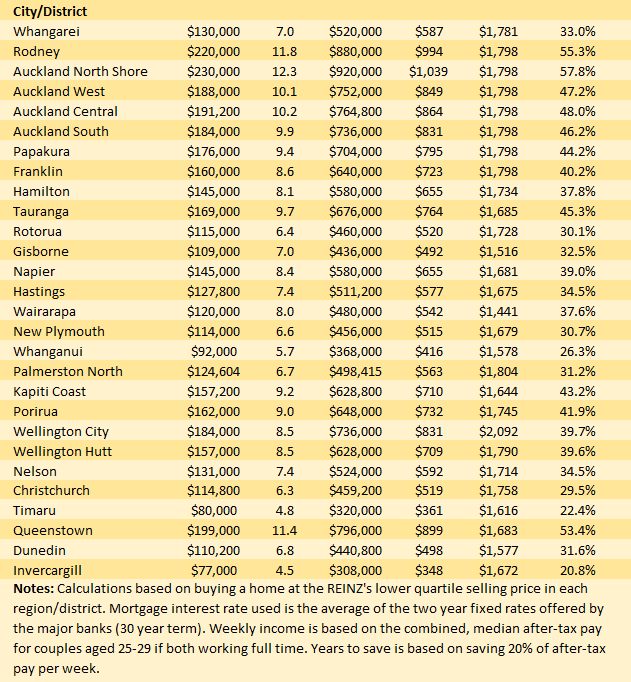